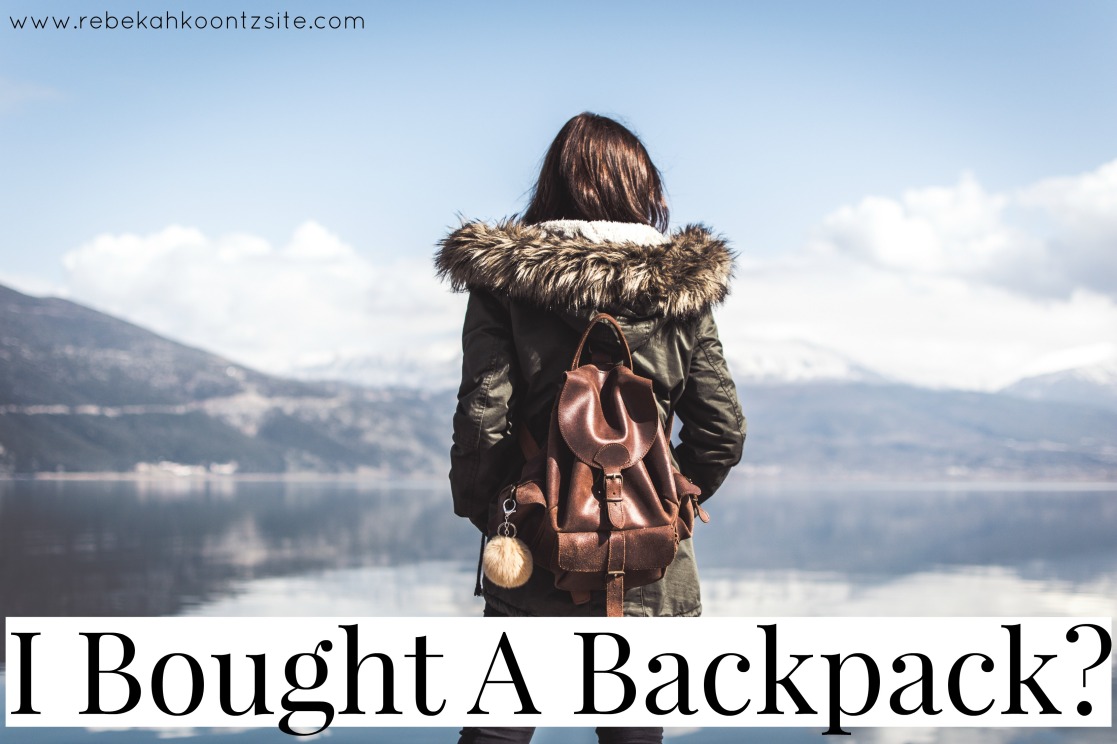 Some of my friends know me as… frugal.

There are famous photographs of me, in line at the 99c store, counting my nickels and dimes while the shoppers in the background look like they’re ready to maul me. I don’t go thrift shopping unless it’s half off day. And I’ve been known to shout “A DOLLAR FIFTY FOR A PACK OF GUM?! YOU RETAIL SAVAGES!” quite loudly in Walmart.

I’m not much for impulse buys.

This past weekend, my dad took me on a trip to L.A.

I had to explain to him that us, Koontz folk, have our own language. L.A. Day simply meant shopping and sight seeing.

And by shopping, I meant getting a $1.50 macaroon at ‘Letté Macarons.

But, alas, we found ourselves in the fashion district, and after passing a store that was floor-to-ceiling crammed with purses and smelled wonderfully of new leather, I remembered that the last time my dad took me to L.A. (for Bring Your 10-Year-Old To Work Day), he bought me a little black backpack.

Twelve years later, the backpack is worn and torn and begging for retirement.

I thought it would be a lovely idea to buy a new backpack to commemorate our second trip downtown.

But I hadn’t quite made up my mind to fork over the cash.

That first store had a massive selection of backpacks. I decided I was looking for black or brown, not tiny, but a decent size. The glowering, sour shop attendant unwrapped backpack after backpack in a dry attempt to unveil one that would pique my interest. I decided on a brown one with detailed cut outs.

No, she wouldn’t go any lower. She was affronted that we’d even ask.

My dad decided we could do better elsewhere.

A second shop was open and well lit with an organized display. I liked a navy blue backpack with pockets on the front.

As we trotted along the dirty streets of downtown, avoiding questionable side-walk puddles and holding our breath as we passed the hot dog venders that reeked of onion and old cheese, I did some soul searching. I decided I didn’t need a backpack after all.

For fun, we entered yet another bag store, this one had a purse in the shape of a regal swan displayed in the front window.

I turned my nose up at everything. “Nothing’s standing out to me,” I told my dad. I finally grinned at a pretty white backpack, but my dad reminded me that I wanted something small. You could fit a 15 inch laptop in this one.

“If you like a particular style,” my dad said, “you can always ask if they have different colors in the back.”

I walked to the man at the front desk, held up both backpacks, and what came out was, “how much?”

He was on the phone. He motioned for me to talk to the shop assistant, a scowling woman in her late thirties.

She frowned at me. “Twenty five dollars.”

I realized my asking about color options was pointless. I asked her if she’d go any lower.

Unsurprisingly, she answered with a curt, “no.”

So, I put everything back where I found it—tiny backpack on the shelf, fringe backpack hung on the rack. We were leaving. I had already stepped out into the fresh, musty air of L.A., when the shop attendant hollered.

“I’ll make you an offer!” He put his phone down and shouted to his assistant to show him the backpack I was interested in.

She pouted. Her hip bent out. She whined that “the girl wanted that one with the things…”

She was very specific.

She started to make her way toward the teeny backpack, but I called out that I wanted the one with the fringe.

I didn’t know until that very moment that I wanted the one with the fringe. Funny how quickly your mind can be made up.

She visibly sighed and changed her course from one backpack to the other. She held it up for him to see, then brought it closer as if his proximity to the bag would raise his prices.

He chewed his lip. “Twenty-five? I can do twenty-two.”

Without hesitating, I turned down the side of my mouth. “I only have eighteen.”

I was so shocked, I didn’t move.

I guess I have to pay the man now, was my first thought.

The woman spent FOREVER wrapping it up. She rolled her eyes and huffed, as the three of us patiently waited for her to get on with it.

I walked out of that store with a big black shopping bag and a head full of confusion.

What did I buy?

Did I want it?

Everything had gone black. All I knew was—standing beside me was my father, brimming with uncontainable pride and shouting, “well done!”

His favorite show is American Pickers.

6 thoughts on “I Bought A Backpack?”