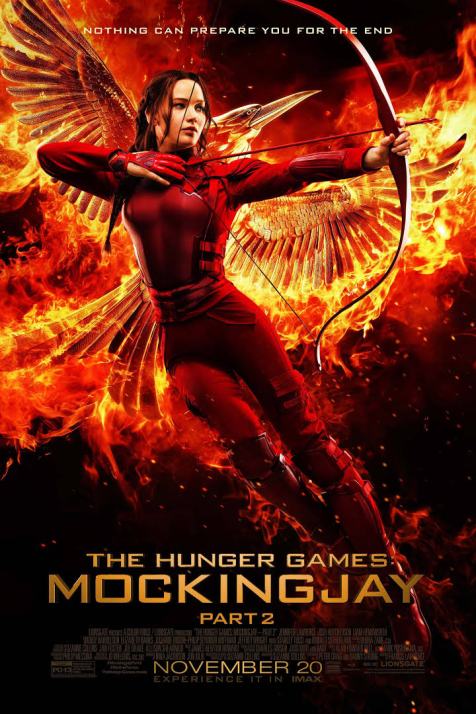 “Nothing can prepare you for the end.”

It says so, right on the cover photo of the film. Nothing can prepare you for the end; not even the statement about you not being prepared.

This movie has it all: Action, Romance, Suspense, Horror (my friend squealed, I promised him I wouldn’t name names), and—of course—an attractive cast.

Jennifer Lawrence is flawless. I’m on team Peeta all the way, and they don’t describe Gale as “the hot best friend” for nothing.

We enter into Part 2 with the sad remembrance that Peeta is scrawny and murderous toward Katniss, due to the venom injected in him by the Capitol.

Let’s not forget Gale, on the sidelines, ever-ready to swoop in for a chance. We all know Katniss will not decide until the very end, until she defeats President Snow and justice is served. This will keep us, romantics, wondering (praying) while the boys enjoy action packed sequences of explosions, deaths, tragedies, and surprises. It is the perfect date-night film.

I read The Hunger Game trilogy before Catching Fire was released in 2013. This allowed ample time for me to obsess, forget, and enjoy the movies afresh. If there was any difference between the books and the movies, it didn’t faze me.

Mockingjay 2 has everything. I felt all the feelings. I gasped and sighed and winced and then my heart melted and I needed a cuddle.

Mockingjay 2 is officially my favorite of the series. I will definitely be watching it again. (And for a fifth time, once it hits the dollar theater.)

It’s not every day that a series keeps me so enthralled as this one; with each movie as equally gripping as the last. I’ve never been a fan of a series, until The Hunger Games. But now, you can rest assured, for every time I return to the theater for a re-watch, I will be wearing my Mockingjay pin. *raises three fingers in respect and whistles the Mockingjay song*

Missing me? Keep updated over my social media!