Tonight was the last night of the year for my Wednesday kindergarten class.

And we had a party.

All the teachers signed up to bring either cupcakes, icing, or sprinkles.

Being the responsible adult I am, I signed up for icing, since I knew I would forget about it and have to run to the store ten minutes before class started. Luckily, my mom went on a grocery run today, so I didn’t have to do my planned last-minute shopping.

We played four corners which is one of my favorites, since it gets them running. I’ve even started running from corner to corner too. The trick is not to knock over any kids, and if I’m successful in that, they really get into it.

Instead of my usual Bible lesson, I read to them from a picture book, a story called “The Legend of The Candy Cane.” It was probably a mistake that I handed out party blowers and mini candy canes before I began the story.

The kids were blowing each other in the face (instantly becoming a “you may not. .” rule) and the candy canes were in a wrapper from the devil. The plastic was so crunchy, all eight kids squishing it in their fingers made for surround-sound static noise.

Blowers and candy canes were quickly put to rest under their chairs until story time was over. 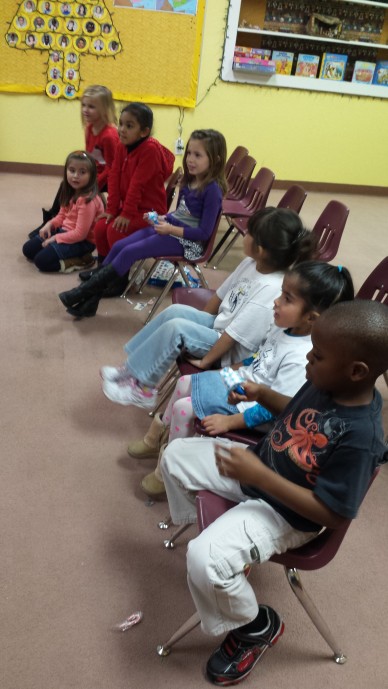 We took the kids down for cupcake decorating, meaning chocolatey fingers stroking my arm, mouths coated with icing, and sprinkles everywhere. (Oops. I forgot to apologize to the kitchen crew for the sprinkles.)

We sang Happy Birthday to Jesus, along with some “cha-cha-choclate!” from a little girl who wasn’t afraid to add her own lyrics. Then it was straight to the bathroom for cleanup.

This little one was tuckered out early.

I brought my guitar in today to make it special and different. (As if cupcakes, blowers, and games weren’t enough.) I could tell they liked it, but they were so infatuated by it, they were too busy watching me sing “If You’re Happy and Your Know It” to participate.

I eventually put down the guitar and did the motions with them.

I did my best to explain to them the real meaning of Christmas. Jesus being born. HIM being the ultimate gift. How we’ve all done bad things and sinned and need to be punished for them, but Jesus came to take that punishment on himself so we could be free.

Christmas is about love and giving of yourself. That’s Christ’s example.

Christ has given us – me personally – hope and peace and strength. I’d be selfish not to give it back by helping others.

It’s like a story I was reading as an option for tonight.

The man told the boy, “say you made my little daughter a present, how do you think that would make me feel?”

“Exactly. The same is with God, when you do something for one of His children – for one another – it’s like you’re doing it for Him, and it makes Him happy.”

Just thought I’d encourage you to give a little of yourself this Christmas season.