A few blog posts ago, I wrote about being a college stayer, though I fear that that post came off too “woe is me.” The reality is I don’t know what I’m going to do with my life. But I’m not sitting around, pitying myself day after day or anything of the sort. I didn’t want it to come off that way.

Today, you may pity me. Pity away. Because today (well, yesterday) I lost my best friend.

“You make it sound like I’m dying,” he told me and my friend.

“You’re gonna be dead to us,” she joked.

This is true. Though I am very much aware that the dead are incapable of shooting me a “I’m making friends!” text, when you see someone on an almost daily basis because they lived a few streets down from you and then suddenly can’t see them for three months. Instant. They’re gone. Only memories remain. It’s quite similar to death.

Even my dad asked me what I was going to do with myself now that Chris is gone. I replied dryly, “cry?”

I’ll be finished pitying myself in a moment. Just allow me a couple paragraphs.

You see, I grew up reading books about a girl who’s best friend lived down the street from her, and they’d have sleep overs and braid each other’s hair and eat Cherry Garcia ice cream together while gushing about their latest crush. We used to live on a two acre ranch in a neighborhood that was only plots of open land side by side. No one knew each other. We merely lived a fence over.

And we lived in the middle of nowhere. So walking to the ice cream parlor or going to the mall was out of the question. Still, I wanted a best friend who could randomly come over and have adventures with me.

The closest I got to that was a girl who lived two ranches down from me but was so in love with horses I grew to almost disdain them. I apologize to all horses and horse lovers everywhere.

Years later, we migrated to the “city” with actual neighbors and mailmen and ice cream trucks. It was pure luck that Chris moved into a house a few streets down from me. We obviously couldn’t have that “let’s watch romantic comedies while you paint my toenails” relationship. But we were already becoming fast friends at church, began walking the neighborhood together, and were quickly inseparable. 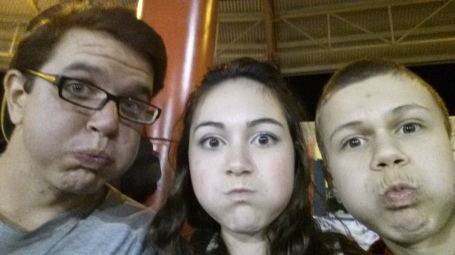 We understand each other’s humor, Chris and I. He has morals and won’t let me get away with anything but he’s not stuffy or harsh. There are some Christians/church-goers, it seems, who you can’t be yourself around because you’re afraid of offending them or getting in trouble. Chris is one of those people who understands there’s a time and a place for everything, but he’s also someone you can have fun with and sing “Vacation, all I ever wanted!” in the middle of a crowded mall with you.

I made a video. (Shocker to me too, I didn’t think one would come out so soon.) My little brother, Chris, and I were at his house the day before he left for college, a sort of Bye-Bye BBQ party, and I found out how to record clips on Snapchat and add them to my story.

The monster was released.

The video is sort of my Snapchat story spiced up. You may find it hilarious, you may be bored to tears. I have no idea, but it makes me smile. This is us in our natural habitat.

And we’re kind of crazy.