Skip to content
I have been sucked into the world of Pinterest. I’m still learning how to use it. But I’ve made about a dozen boards already, and it’s so much fun.

Through Pinterest, I found a recipe for “Moist Pumpkin Spice Muffins (With Cream Cheese Frosting).” 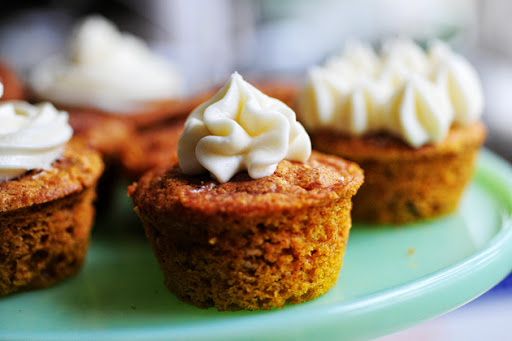 I pinned and clicked and wanted to see what the recipe called for. I have a weakness for pumpkin. I love pumpkin pie. Pumpkin bread. Pumpkin scents. . .

The link shot me over to the site of the Pioneer Woman from Food Channel! My mom loves her stuff. I scrolled, and (sorry about my scepticism) but I was surprised to find that I liked it!

She had a picture to go with each step. And for those like me who are challenged, this is the most helpful thing. It’s why I like doing step by step pictures on my blog. It’s helpful.

Anyway, I was hooked. And the pictures gave me confidence. I thought, “I can do this.”

And we had all the ingredients. All I needed to get was canned pumpkin.

On the other hand, when I was telling people I was making pumpkin muffins, they would give me this look and feel compelled to remind me that it isn’t fall.

People. I wear dark colors in spring. I don’t care!

Pumpkin muffins. I think you just don’t understand the enormity of this glorious circumstance. PUMPKIN MUFFINS!

We were having the Singles/College and Career Sunday school over at our house for a fellowship, so I decided to make these muffins for the event.

I’ve saved myself so many times by taking all the ingredients I’ll need and putting them on the counter. It wouldn’t be the first time that half way through the recipe I realize we’re missing vanilla or butter. Butter happens more often. And then I’m stuck with awkward batter in a bowl and don’t know what to do with it.

These are all the ingredients you’ll need for the recipe. (PS, I am in no way saying this recipe is mine. I’ve made it clear that I’m following Pioneer Woman.)

So, obedient to the recipe, I started by sifting a cup of flour.

Half a cup of sugar.

I was totally trying this whole capturing-slow–motion-pouring thing.
A teaspoon of baking powder (not to be confused with baking soda, which usually comes in an orange box).

Then the three musketeers, cinnamon, nutmeg, and ginger, which obviously refused to stay still because the picture came out fuzzy in all of them. 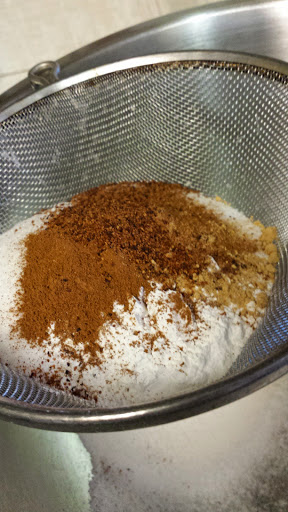 Then you bang the heck out of the strainer against your hand until it all falls through, fluffy and perfect.

Pioneer Woman says that if she has little kernels still at the bottom of her strainer, she’ll rub them through with her fingers.

Or you can be like me who gave up and thought that my muffins could definitely survive without those pieces and thus tapped the strainer to the side of the sink until all the pieces fell out.

We can’t all be Pioneer Woman.

Four table spoons, which you then slice into smaller pieces. My butter was soft by the time I got to this, so my slicing was slow, as if it was for revenge.

If that wasn’t enough, I tossed the chunks into my bowl and mashed the life out of it until it was no longer there. 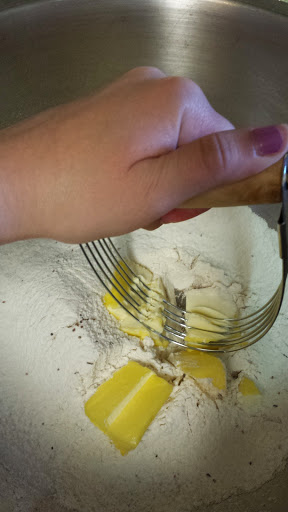 In a seperate bowl, you plop your heaping cup of pumpkin. I made a mess. 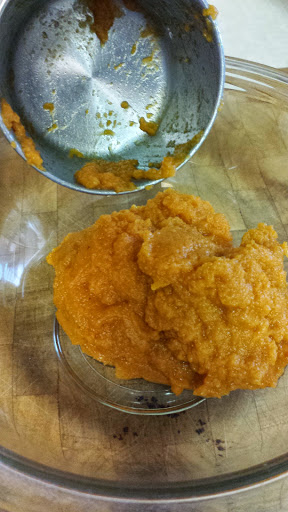 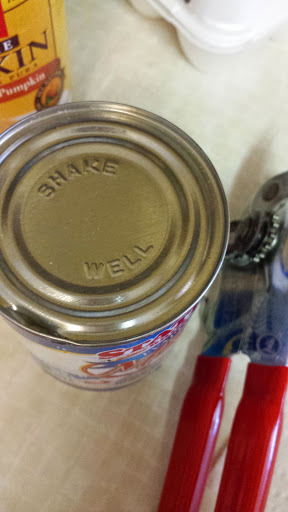 Which you’re supposed to “shake well” before opening. Of course, I didn’t notice that until I already pierced the side. I attempted to hold my thumb there as I shook it but it still got everywhere.

Finally an egg. Then you mix it all up until it’s this ugly pale orange color.

It apparently offended my camera because my camera refused to focus.

Next you dump this mixture into your dry mixture and stir it in. Pioneer Woman put it this way, “don’t beat it to death. Have a heart.” That made me laugh.

Especially after my Revenge Of The Butter episode. 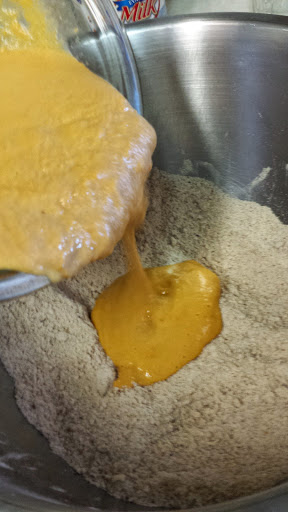 I’m uber professional, so I use an ice cream scooper to fill up my muffin (well cupcake) tins. I had greased them with Crisco before hand.

Before I had begun, I realized my initial mistake: the recipe only made ten muffins, it said. And we were having a bunch of college age people coming. My mom’s solution was that we’d cut them in half.

So anyway, about at this point, I was feeling very good about myself. I slid them into the oven and set the timer. Then came back a few minutes later and thought I’d take a picture of them in the oven.

Then I started on the dishes. 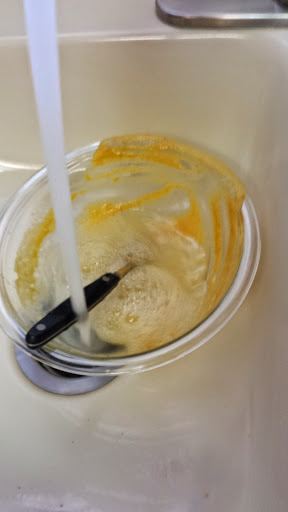 About which time, I started yelling…

“OH NO! No! No, no, no!” I scrambled to dry my hands and grab my phone, and I checked the recipe and sure enough. I forgot to add the cinnamon sugar topping before sticking them in the oven.

I snatched them out of the oven. They had six minutes to go and were already fluffed and perfect… minus the topping.

I gathered all my baking skills together and tried not to kick myself because this is exactly where we went wrong last time. Except this time I didn’t overdose on the salt.

I tried an egg white glaze, painting it on, then sprinkling the sugar mixture. 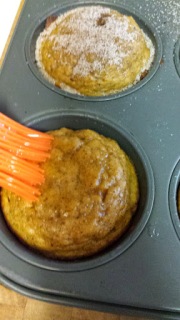 I stuck it back in the oven, but I knew the muffins were done and there was no way the sugar was going to melt in such a short period of time.

The sugar wasn’t sticking the way I wanted it to.

As I final precaution, I got a spoon of water and used my finger to flick droplets onto the muffins. 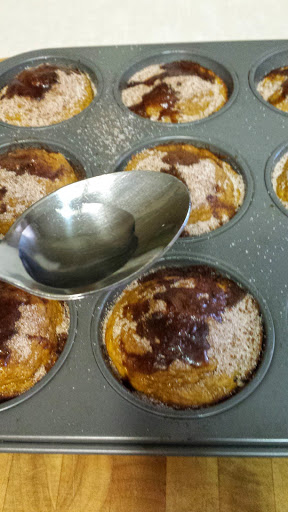 This saved me the most. It actually looked like I iced them a little afterwards.

Now, I have an explanation on why it went wrong.

Simple fix! I’ll print out the recipe next time. And I ended up quitting spotify and turning on the radio in the front room instead.

That’s my story and I’m sticking to it.

They were good, though. Not as sweet as I would like, but the topping did help. I skipped the cream cheese icing since this was for an outdoor party, and that sounded too messy. But the muffins were a hit. They didn’t last very long.

But they definitely were moist. I told Jake there weren’t any carbs in them so he tried one. He said they were delicious, and yes I can cook, and I had his blessing that I was now ready and prepared to find a man, which I found way funnier than it actually was so I yelled, “Yaye, I can find a man!!” in an excited voice that was definitely too loud to be socially acceptable. 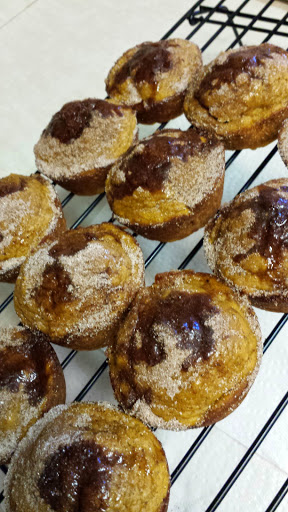 So this was a success/fail.

I guess my desserts never look like the picture anyway..