I have a dog named Kiki. She’s a chihuahua, which is mostly why I didn’t want her in the beginning. She wasn’t a yorkie, so I checked out.

My Mom, however, was interested. So one thing led to another and “Goggles” was then at our house — as my mother’s dog.

We barely knew anything about her. My first impression was that she must have part wiener dog in her, for her length and the length of her tail. Other than that, the poor thing was just fixed and looked utterly worn out. She did nothing but sleep, and we weren’t sure she could bark.

One evening, we heard her yapping in her sleep, and we all shared little laughs and said, “she does have a voice!”

It was cute then.

Her recovery was a long one, and we all had to be very gentle with her. Any sudden movements would freak her out like you were coming to get her.

My favorite thing to do was watch her eat. She wasn’t engrossed in her food like most dogs. She would take some pebbles, drop them outside the bowl, then eat one at a time, opening and closing her mouth repeatedly as wide as it would go, and stare straight up at you with those happy but unsure big round eyes. It was adorable.

One day I was lying beside her dog bed petting her when I noticed her incision didn’t look right. My mom took her to the vet, and they said that one of her stitches hadn’t been taken out and got infected. They had to drain it and sew her up again. At some point during the surgery they also noticed all her teeth were rotten, they ended up taking those out too.

It was back to recovery for her. By then we changed her name from Goggles to Kiki, after one of my favorite Hayeo Miyazaki movies “Kiki’s Delivery Service,” but then we gave her the nickname “Toothless,” just because it fit.

I hadn’t realized that by my picking her name, I had sealed my own fate. But then, my mom taking care of Kiki, sealed her fate as well. Kiki became attached to my mom.

She goes straight to my mom, no matter who calls her. When people were over, she wouldn’t go to anyone. She was still a mellow dog. She just chose favorites. And her favorite was my mom, everyone knew this.

My mom was set on finding a home for her. We suddenly became a foster family (which is humorous, because all my life, we’ve been the animal’s LAST home. Not second to last). Try as my mom might to show she wasn’t attached, she’d still come home, pretend to ignore the dog, then soon we’d hear kissy noises and see Kiki happily on her lap.

My mom wasn’t budging. I kept joking that I’d take her, just because I knew my mom would say no.

Until one random night, my mom had a gleam in her eye, came to my bedroom and dropped off the crate and the dog for our first sleep over. Kiki barked and scratched and whined all night.

Same as the next night.

My mom and little brother left for a missions week, so the dog had no choice but stay with me. We tried to gain an understanding.

She ended up training me.

I was watching movies in my bed, and she hopped up, went straight for the fuzzy blanket I had folded at the foot of my bed, and buried herself in it. She dug and dug until she was completely covered, then I’d hear her let out a content sigh, deflate, and go to sleep.

One night I was desperate. It was like she was a newborn. She was asleep. I didn’t care. I wasn’t waking her up. I wanted to sleep too.

It worked out. We both slept, no harsh words in the night. Happy faces in the morning. And I’d be that obnoxious mother, taking pictures of her at random times. 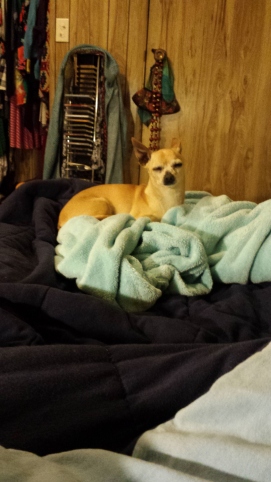 A few “oopsies” in my bedroom lost her her bed privileges. Also because I would sometimes wake up in a panic and have to feel the bed to make sure I didn’t crush her.

But it’s been a few months now and it’s like I don’t even have a dog, she’s so good. She sleeps in the crate all night. In the morning, gives a little bark when she wants out. And at night, if I’m watching movies, I let her hang out in the bed, but she goes in the crate when I’m ready to sleep.

Her personality is what makes her different from chihuahuas, I think. She isn’t snooty, and she only yaps if you forget to let her back in the house. But like in the picture above, she was staring at me one night. It was for a significant amount of time, because I was able to text my friend, “she’s freaking me out!”, and take a picture of her as she was doing it.

Then I guess she gave up, in the cutest way.

She’s been through a lot. We think by her actions and signs on her body that she was crated and abused and used as a breeder. I’m so happy to tell you, though, that she goes with everyone. She’s happy. She runs around and gets excited and crazy. She’s not territorial of the bed anymore either, her and our other dog practically sleep on top of each other now.

It’s such a blessing to see that we made a change in her. She hated being in our laps before, she would sit up and be stiff. Now, you can tell she’s just a happy little dog. And it makes me happy to see it.

What’s my point of this post? I don’t know. I guess that animals are important. Making a difference in their lives and seeing change for the better is rewarding. If you foster or adopt, good for you. It’ll be work, but it’s worth it.

I hope I didn’t bore anyone with this post. I just wanted to share Kiki’s story. She hated being touched and now she’s an absolute lap dog. It just takes patience. I took the picture of her above because it was a big deal that she was lying down (and sleeping!) in my lap on her own.

I also love taking her picture, even though sometimes I get caught. And it’s awkward.

I also made her a cute little dress!!!!

Then we had a heck of a time getting it off her.

She didn’t like it very much. I’m sorry to say that I, on the other hand, was laughing like a hyena.

You just can’t help but love this dog.