The problem with having a blog your family reads is that you can’t write funny stories when it’s supposed to be a secret.

Actually, I was laughing and taking pictures of the whole scene (between assisting them, of course). Afterwards, I went inside for some water, and my mom came busting in, hurriedly telling me, “don’t post those pictures yet, he’ll see!” She obviously had the same thought.

Well, now that the cat’s out of the bag, here’s the story behind my dad’s Father’s Day present, which turned out to be as humorous as he is.

We started off with the idea of a wet suit. My dad went door to door, passing tracts for our church one Saturday, and one thing led to another yard sale, and he walked away with a $5 surf board, happy as a clam.

He had sent me one time to the thrift store to see about wet suits, but my mom thought that was gross. She said it was more expensive, but if we wanted, we could split it among us three kids and buy him a new one.

There came up the question of, “how much use is he really going to get out of that thing?” But it was me who stated that that’s why it’s called a “gift.” It doesn’t have to be useful. It just has to make him happy. (I’m not sure how wise that theory is, but it sounds good. My family bought into it at least.)

So we went to the Sport Chalet. Luckily, you walk in and immediately to the left are wet suits. My mom, little brother, and I turned a stared blankly at the row of black skins. A man came to help us. When we said we were looking for a surfing wetsuit, he took us to a different section of the store.

This is where it all began.

“How often does your husband surf?” He asked my mom.

“Not very often,” was her casual reply, followed by my little brother and I simultaneously turning to give her a look. My dad’s never surfed. We’re not sure he’s even been on a surf board before.

“Does he do it professionally?”

My brother is not very good at this. He started to snort, so I kicked him.

This exchange went on for a good five to seven minutes, impressively, until my mom was in too deep, which led to the icing on top.

“So we have the short sleeve for hotter weather and the long for cold. How often is your husband in the water?”

By this time, even my brother and I wanted to know how long our dad was in the water when he “surfed.”

I KID you not, my mom didn’t bat an eyelash. She shrugged, “when he’s done.”

Then we turned our attention back to the man to see how he would react to this.

“Is he done because he’s tired? Or is he too cold…?” He prompted.

My mom shook her head and shrugged again. “No,” she said simply, “he’s just done.” Then I started laughing.

Needless to say, we didn’t buy a wet suit that day. Because the only truth said was we were “only looking.”

Thursday, I was feeling overwhelmed with a lot of stuff I had to do before Sunday, so I didn’t want to go out. My mom and little brother were going to buy my dad’s present, so I sent them with money instead.

About two hours later, I got a call. “Rebekah, didn’t you say that you wanted to buy Papi something he really wanted as a gift?”

“Well, I know what he really wants.”

Shortened, my mom hung up with me, got my older brother on the phone in New York, and I got another call.

“Be ready, we’re going to need help getting this thing down from the van.”

My mom is 5’2 and the only one sure of her height. My little brother and I are about the same. Our van isn’t small, especially compared to us.

The plan was simple.

“I’m going to get on top of the van and push the box toward you. Be ready for when the weight shifts.”

My little brother and me took our positions behind the van and everyone started grunting. Pushing it wasn’t working. My mom began a wedge technique, while I stretched and got on my toes to try to lift it on my end in order that it would move easier. We each pulled a muscle by the time we finally got the thing lowered to the floor.

So you can see I’m not just a complainer. This thing is big. 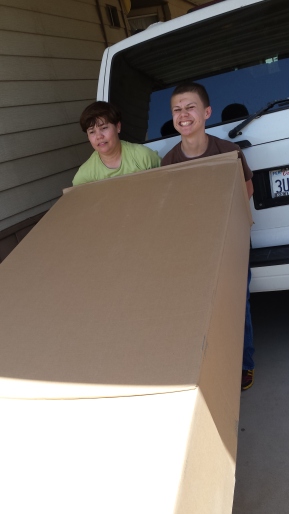 But NO! It’s a present. And it was going to be a surprise! 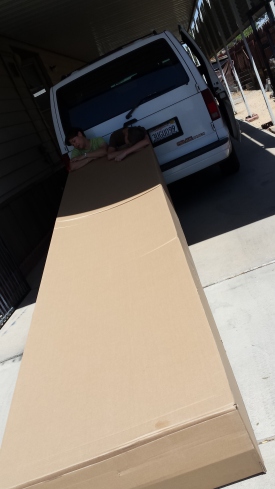 We had to walk it around the front to go in the other way, just to get it to the back and hide it behind the shed. (He would never look there, right? I had originally offered to hide it in my room. But that’s when we were considering the wet suit. Now, looking at the huge box we were struggling to pick up, the thought of hiding it in my room was funny, ha-ha.)

We somehow managed to get it from the front yard… 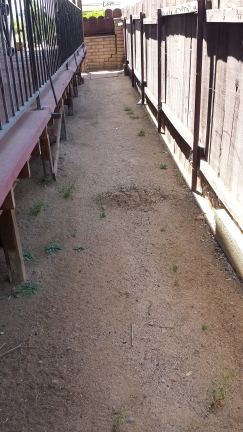 Squeezed along the side gate…

And finally behind the shed, where we put it down and decided that even though it was sticking out a little bit, that’s where it was going to stay. And he could come get his own present when we gave it to him on Sunday.

In vain of my mom keeping a close watch on him all weekend, he did see the box. And inspected it enough to find the “made in Canada” sticker, though we peeled off anything that said kayak on it. His assumption was that it was something for the motor home.

I was pleased that it did end up being a surprise after all.

The box fell apart so he got to carry it the easy way.

Then wasted no time, testing it out.

It turned out being exactly what he wanted, a sit on top two seater. That was reward enough for me.

Even if me and my little brother almost died when it started to fall off the van and onto our heads.

Hope you all had a great Father’s Day!