As we all know, Jake‘s birthday was yesterday. However, this was a total surprise to the majority of us, as we thought Jake was having a dinner at his house just for fun, as a kick off to summer, something of the sort.

He swears up and down he specified it was for his birthday.

Apparently the real story was that he asked his mom about a birthday party. To which she replied he was too old for, then paused a moment before concluding, “we’ll have a dinner for your group from church.” The rest is history.

But boy, can Jake’s mom do a dinner right.

Jake had been specific to what we were to wear to this dinner party. He said no denim. The demon inside me wanted to wear all denim, but I behaved. I came out in a sleeveless red dress and asked my mom if it was “dinner casual,” she said yes.

However, when I arrived to his house, who was there to greet me but Jake and his brother, both wearing jeans. And our friend Michael, who was on the bitter end of “casual” and shrugging. I realized I specialized in “dinner” and thus went against the majority. Julie showed up in a chic casual outfit, though. She found the balance.

But enough about fashion, on to the dinner.

We talked inside, sipping apple cider from crystal wine glasses. I noticed the table wasn’t set. Jake had said they were running late, but I didn’t realize how late. Their breakfast nook was crammed with china and glasses and stacks of plates and centerpieces. I thought about offering to help.

“Why don’t you take them outside, Jake? You don’t have to stand awkwardly by the door,” his dad was saying.

I had forgotten. Jake said there might be a camp fire and to bring extra clothes. But being the girl that I am, I chose to do my nails as opposed to triple check that I had all my necessities.

Jake took us outside, and we all “oooh”ed and “ahh”ed at the beautiful table setting. They set up a canopy over a long, elegantly decorated table, and intertwined small twinkle lights above us. The table was set with a brown table cloth, a centerpiece candelabra with crystals, and small little candles spaced down the length of the table.

Once we were seated, we were served Shirley Temples (with a bowl of cherries if we desired) by Jake’s little sister.

Then, without us having to ever get up, Jake’s little sister, mom, and even at one point dad, brought out the first course and set it in front of us.

It was a starter plate of cheese, crackers, and a really yummy, thick sweet bread. What I didn’t know was that the cheese was meant to be spread. Jake joked about “being classy” all night. Luckily he didn’t see me unwrap the cheese triangle and sink my teeth into the tip, at which point I realized it was creamier than I thought.

I finished my plate, which may not seem like much, but it’s a big accomplishment for me. I’m a very picky eater, and Jake being from Guam, I was afraid I might not like one of the dishes his mom made. Though I was determined to try my best.

Our second course were sewered, bacon-wrapped shrimp, plated criss-cross on our dishes. I was a little bit afraid. I’d never had shrimp before. I think I honestly tried it because I love bacon, and they’re right. Bacon does make everything better. It was really good. It was juicy on the inside, but crispy on the outside with the salty smokiness of bacon. Tim was even gnawing on the stick. 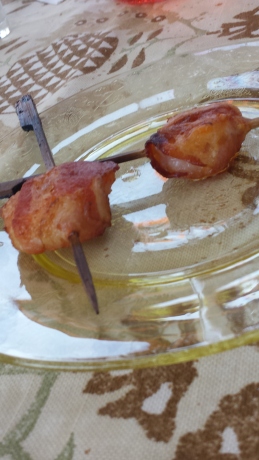 Third course was a Caesar salad, topped with croûtons and cheese.

Croûtons AND cheese on my salad? Yes please. You’re winning points with me. I scraped the cheese off the bottom of my plate with a fork. Looking back, that’s another thing that broke the “classy code.”

Finally it was time for the main course, by this time I was excited about it. Jake’s family didn’t know this but they just made me eat shrimp and I loved it. What else could there be? 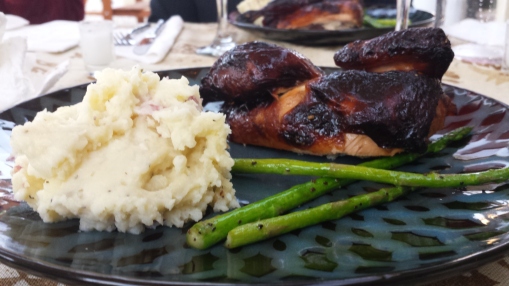 Thick and creamy garlic mashed potatoes, half a roasted chicken, and seasoned sticks of asparagus.

Julie took one look at the plate, “I don’t think I can eat all this!”

I was already digging into the creamy garlic-ness. “Start with the potatoes, Julie. They’ll give you strength.”

I tuckered out by the time I got to the chicken. Not so much that I didn’t have room for all the flavorful skin, however. That’s my favorite part.

Jake said that they had boxes if anyone wanted to take their food home. I thought he was joking, but he wasn’t. They say “have a nice day” and everything on them.

We sat around digesting and playing games. Jake, of course, was the life of the party, reenacting stories with colorful details that had us all doubled over, holding our sides and laughing.

The sun had gone down, and I was thinking it was time to leave, when his mom came out with plates of strawberry shortcake, embellished with slices of strawberries, and sprinkled with powder sugar. 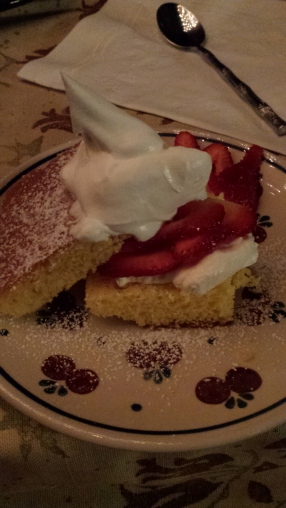 And bowls of ice cream, followed by her running out with a tray and yelling, “wait, I forgot my chocolate things!”

We’re young, we didn’t mind tacking a few of those off her hands.

Then came a tray of cream puffs, placed before me like a horrible reminder: “you’re full.”

I had one or two.

Chocolate éclairs were placed on the other side of the table.

Then she brought out a mini chocolate cake with a “1” and “9” candle on it, and we sang happy birthday. 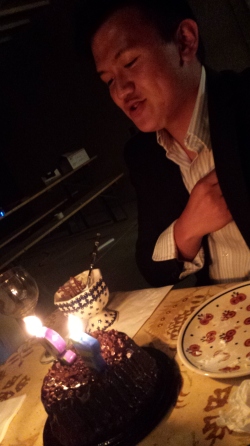 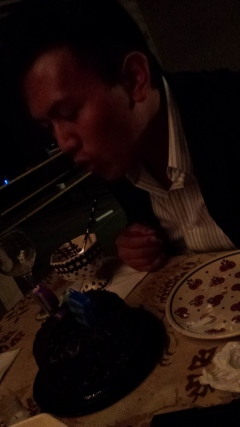 His mom asked if we wanted any tea or coffee, but I was beyond overwhelmed by it all. She went inside and then called out the window, “Jake! Tell them we have passion fruit, mango, peach, lemon, and green!”

I looked at Jake with big eyes, “those are all the teas you have?”

My mom’s always telling us kids we don’t live in a restaurant, but that was the first thing I thought of when there were so many choices.

Mrs. L definitely OUT did herself. I was inspired to host my own dinner and try to do it as pretty as hers. The amount of work she put in before and after was incredible.

Toward the end of the night, though, the fact that I had been up at five that morning for work, without a nap, was starting to take it’s toll and I knew it was time to go home.

I thanked Mrs. L ten times over, hugged and wished Jake a happy birthday, and took one more group shot before I left. 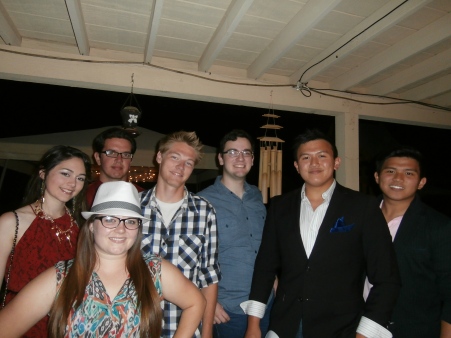 I had a great time. Obviously, so did my taste buds.