Outside the Del Taco we usually go to for Taco Tuesday night was a little white trailer set up. It was toward the back of the parking lot and nothing spectacular to look at, except for the long trail of people stretching out and curving to the side, lined up and waiting to get to it.

“Cap and gowns,” my mom said after studying it, “must be for one of those huge high school graduations.”

I get excited for graduations, probably because the thrill of mine is still fresh in my mind. I feel like I view graduations as a married woman would view a wedding. They’re still so happy about their own celebration that to see someone else get as happy doubles their joy.

I don’t know if it shows or not, but I don’t like school. I was ready to graduate by kindergarten when I decided that the “treasure chest” didn’t have as many “treasures” anymore.

But, you may be recalling, you were homeschooled?

One of the misconstrued thoughts about homeschoolers (real ones. If you want to know what I fake one is, read my post about being homeschooled) is that they are either A) super smart, or B) an idiot. I’m neither of those. I just happened to be a normal girl who hated school and rather read Madison Finn books than do my science, or Math-U-See, or history..

Graduation, to me, was like breaking out of prison.

In fact, I was so excited, I shook the guy’s hand like he was congratulating me and went to sit down, leaving my diploma with him. He had to chase after me on stage.

Homeschoolers have graduation ceremonies too. We wear cap and gowns. And we put our pants on one leg at a time. Just like everyone else.

Sometimes we can even go as far as matching the length of our ceremonies with those of a big high school.

The way ours work, is we walk down the isle, usually of a church, then take our seats. Then we stand and realize we were sitting on the bulletins. In the bulletin are the hymns required for us to sing as right of passage out of highschool. At my graduation, they forgot to give us the bulletin’s, so the audience was staring at us, singing, and we were staring right back, smiling awkwardly.

The big joke of my graduation were my shoes. 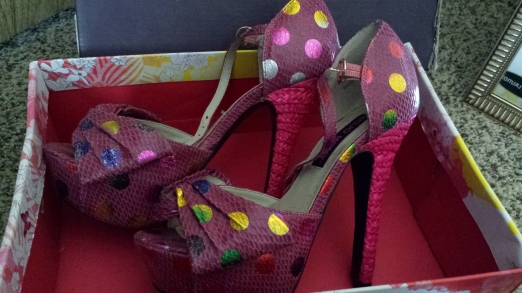 I went out on a mission to find the most childish, crazy looking shoes. They would be hidden under my gown as a kind of metaphor that even though I’m growing up, I’ll still always be a child at heart and never be too stiff to have fun.

I scored those pink bowed, painted polka dot beauties at Broadway Shoe Outlet in the Ontario Mills Mall. They look like a ten year old designed them. And they were platforms. They were perfect.

Except for the fact I had never worn platforms before.

A huge part of our home school graduations is that every graduate says a speech and every dad says a speech, making for a long ceremony. This year, they started playing solemn music in the background if the fathers were going over their one minute mark, signaling them to wrap it up. At first I was mad, how dare they expect dads to condense eighteen years into sixty seconds! Towards the end, though, I was looking forward to the music. It just meant one more graduate down. However, during the “Charge Of The Graduates,” after about thirty minutes, even my mom leaned over and said “where’s his music?”

Heather, Hayley, and Kyle, I went to your graduation last night. It’s long. . So I appreciate you patiently sitting through mine last year.. I understand now.. And I’m so, so sorry, haha.

But no. Graduation, long or short, or whether you participate in the ceremony or not, is a big deal in anyone’s life. So I just want to congratulate everyone who’s finishing the high school chapter of their lives and moving on to greater things.

Celebrate! You did it!

Here are the words everyone wants to hear, because I know you want to relish the moment: