The original purpose of this blog was so that you could get to know me as a person as I continued to write fictional stories on the side. I don’t know where this blog went. I guess either way you get to know me. But sticking with the first plan, I’ll tell you more about myself.

I’m hoping you’re not bored. But I’m a blogger. I can’t be thinking about that right now.

I was around thirteen, I think, when I first stepped foot onto the March Air force base, wearing jean shorts, a T shirt, and converse. I was so out of place.

There were military personnel everywhere. Mixed in among those, wearing the same uniform, where these kids called Sea Cadets.

I couldn’t tell the difference either way.

I remember sitting in a enclosed rectangular classroom by myself. The walls were a faded white and looked almost beige. There were military posters tacked at random (probably covering pieces of the walls that looked worse from age), featuring pictures of ships, colorful bar things and ribbons, motivating quotes, a map of the world, and a diagram of military ranking patches.

I was trying not to squirm in a slippery plastic chair, the kind with the wooden school desk attached and basket underneath, as a really tall kid named Saylor and a grumpy smaller one named Wood sat at the front of the class arguing. They were apparently in charge.

The rest of the kids were outside doing their “drill.” And my older brother, didn’t stay with me because he was supposed to go with the high school kids. He was the reason I was there.

My mom had been looking for a good boy scouts troop for him. I had been complaining that I wanted to join. Boy scouts seemed way more fun than girl scouts, but girls weren’t allowed. When my mom told me that girls could be Sea Cadets, I wanted to at least try it out.

We left that day, signed up and uniforms distributed. I don’t know when “trying it out” turned into a four year commitment.

I started out as a Leaguer with the 10-13 year olds. I proved to be a mature 13 year old, so they moved me up to a Sea Cadet with my older brother, and the day after Christmas of 2008, I went to bootcamp at Coronado military base, where they taught me not to smile, how to take a shower under a minute, and exactly how far I could run in the sun until I was ready to dry heave my guts out right before collapsing on the grass.

Girls were having meltdowns all around me and throwing up left and right from some sort of stomach bug. I ate nothing but potatoes and fruit, and if something didn’t smell right, I wasn’t taking the chance.

I also refused to quit, like a lot of the girls who did. I found it pointless. They would just have to start the torture all over again at the next bootcamp. I became the bathroom motivator as we all stood around in towels ready to wash the shampoo out of our hair in our thirty seconds “showers.” And closet encourager, when I found a girl slumped in her locker, crying.

Then I found out she wasn’t crying from stress. But because her dog died. . . A few weeks ago. . . And then I realized I was way out of my element. That one is a long story.

Soon enough, though, our company was making our march into a huge parking lot with Alpha Company and Bravo Company as well, everyone itching and ready to graduate and LEAVE that horrible place. We did. I didn’t stick around.

Bootcamp paid my toll to be able to go to the fun trainings. Like Culinary, and Ground school, and Mass Comm, and Petty Officer Leadership Academy, and Marksmanship. They all had their dramas. But Marksmanship was by far the best. 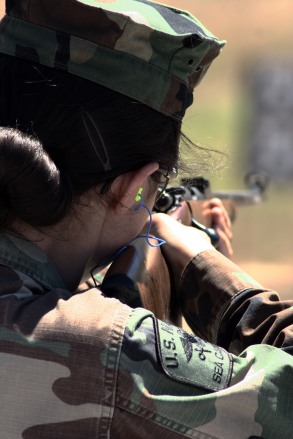 A week in Banning, California, sweating it out in the sun and eating and sleeping at the gun range, doing nothing but learning gun safety and of course shooting a bunch of weapons. 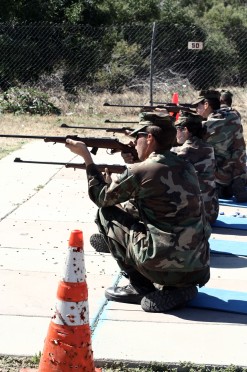 I ended up being the only girl who signed up for the training. Three other girls were the culinary staff, but also my friends, which helped during nightly shower time, which was two tarps, the side of a building, a brick wall, and a hose. 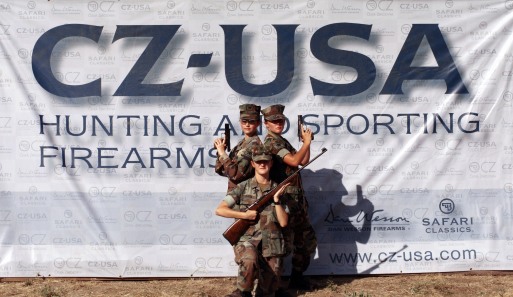 A lot of the guys made fun of me for my size, but I can proudly say I shot everything offered to me, even if one of the male officers had to come by and hold the gun for me with one hand, just so I could lift it. 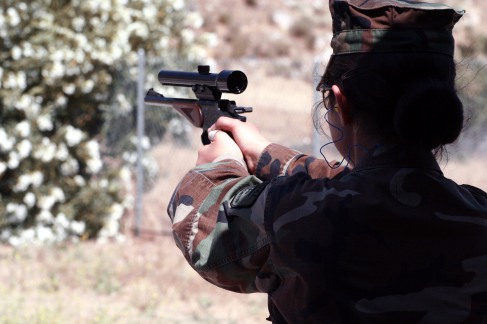 A funny coincidence is that I went to the same training as Kyle that year. We spoke once that week, and what I got from our conversation was he didn’t want to talk to me.

He also played a horrible trick, making me think he was British. I had heard his family adopted, so I had assumed it was him and bought into everything he said that whole week. All lies.

I think it was about a year later until we were forced to sit next to each other for a three hour C-17 flight, that we started to talk and actually became friends. The rest is history.

Sea Cadets taught me a lot. I can complain about it for hours. I have come away with so many stories. But like I said in my last post about how it helped me teach kindergarten, it has helped me a lot in life. Taught me some life lessons. Like when to talk, when I don’t have to talk, how to stand up for myself, and definitely how to be a better leader and a better follower.

I also got a killer two-inch bruise on my arm from holding a shot gun wrong. I felt like a beast.