It was mostly a lazy day today.

We slept in. I got up a little earlier to head down to breakfast in my pajamas (I was that girl), because with my stomach out of whack, I figured skipping a meal wasn’t the best idea.

Then I watched Netflix. Played on my phone. Took a very long shower. Attempted to dry and style my hair. Actually did my makeup. Then messed around even longer until two thirty.

We were burning time until the auction at Gallery 63. If you don’t watch Auction Kings on Discovery channel, you have no idea what Gallery 63 is. So this means nothing to you. And then that saddens me.

It was by total luck we came into town the day before their auction, which is why we stayed here an extra night. 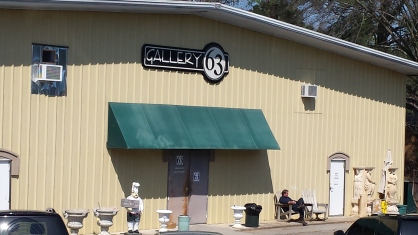 The first matter of business was trying to find which doors we were supposed to enter from. They’re the rusty metal one’s right in the center. I only knew this from watching someone else enter.

Then it was like walking onto the TV show. 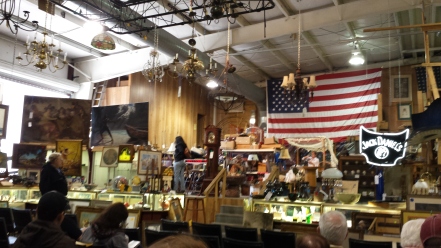 Right off the bat, we saw Paul walking the stage, telling people this goes there and that goes here in a whole kind of group squabble. 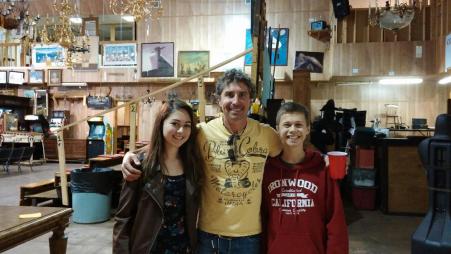 He even went out of his way and gave us two pictures and signed the two of them, leaving us with the fat sharpie and saying we should track down Cindy and Delfino and get them to sign it too.

We also convinced my mom to register for the auction. In case something really good came up. 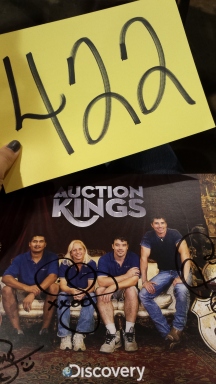 It was like a yard sale on steroids. Pictures, painting, boxes FULL of baseball cards. So. Many. Rugs. Furniture, fountains!

For my imaginary house, I picked out a striped rug, a chandelier, a shiny green buttoned couch (my mom said she would’ve bought that if we lived close enough), and the coolest white, S-shaped recliner thing. 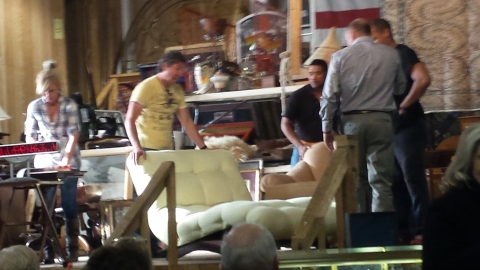 Things were selling for next to nothing prices. It was pretty ridiculous. So was how fast they were selling them.

There were constantly around five to seven people on the stage, carrying, labeling, scrambling to get out of the way. When one thing sold, it was just as quickly hauled away and something else brought into it’s place. It was chaotic. People were bumping into things and each other. One guy dropped a china plate and there was a collective gasp from the bidders, until he bent down and retrieved it, magically in one piece.

Whenever something like that happened (and it happened a lot), no matter who did it, their eyes would go from what they knocked over, straight to Paul, like a caught child.

The auctioneer ended up being the one who made the most damage. He went to gesture the highest bidder and in doing so knocked something off the counter, obviously glass, because it shattered into a million pieces, followed by the stone-dead most guilty silence.

The whole thing was high energy and entertaining, though. There were also some weird things they sold like a church pew and a glass ball with a head in it! 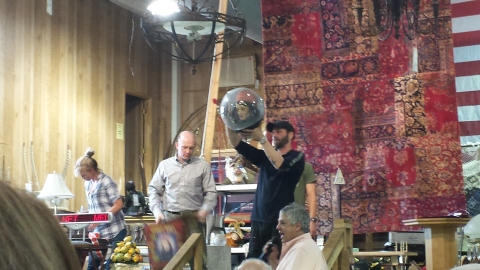 The banter was funny too. One of my favorite lines was “guaranteed stolen” or “this was all we could get, and then they came home.”

We didn’t buy anything after all. Everything I wanted was big. And painful. Especially to see a red piano being rolled away, sold for $25.

We took the shuttle back to the mall for dinner (less smelly, and driven by someone different), where I had Alfredo pizza and strawberry lemonade and it was so good.

Walking through the mall can be a challenge sometimes, though, with all the flyer people. I feel bad ignoring them after a while, so I try to be polite and at least take the flyer, then move on my way.

People for hair and makeup are always trying to get my attention. I’m sure somewhere it’s an insult.

Anyhow, a guy suckered me into looking at him. I tried to say no, but then took the flyer and thought that was enough, but he kept insisting I let him try to straighten one lock of hair. Just one lock.

I agreed. He said that if I didn’t like it, I would get the thing for free (which doesn’t make sense, but okay). It straightened. And yes it did look shinier. Then he curled it and started going through his little spiel.

“If you’re cheer leading, it’ll stay curled. Or if you’re going to the prom..”

It was my mom who put him in the place and told him I’m older than he thinks I am. He stopped and examined me, then asked how old I was.

Ah, but you never ask a girl how old she is, we reminded him. (When you get my mom and I in our difficult mode, you’re in for a treat.)

He tried to get it out of us, but no luck. Then he switched gears dramatically, smiled, and asked my mom where she was from.

Turns out, they’re both from Venezuela. They went to Spanish at the drop of a hat, and he said how he left when he was five, but his dad is a missionary there.

He came back to asking me my age, so to be irritating I said I’m probably the same age as him (who am I to judge appearances?). We were ready to be heading out, though, so my mom and I took our initial two steps toward leaving.

“I only ask that,” he said. And then, black and white, his ENTIRE BEING went into total seriousness. “Because I’m looking for a wife.”

If I was chewing gum, I’d probably have choked on it a little.

My mom, however, didn’t bat an eyelash. “Well pray that God sends you one!!”

He paused a moment, thinking this over, then responded by grinning so big it filled his face and scrunched up his nose. “Ahhhhh.” He pointed at her. “I like the way you think!”

So there you have it. Motherly wisdom. Available, even to strangers.