We were back at Costco this morning.

Can’t get enough of that place.

I’m sick of it, and I’m sure it’s sick of me. However, their “lawn chair section” got totally disassembled and in it’s place was pallets and pallets of cute little lawn bushes. But man, they work fast. Like elves. I mean, we were in there yesterday, weren’t we?

I bet you’re wondering why we were back. Or maybe you’re already going, “oh no, there was a problem. .”

No problems with the phones, per say. The problem simply occurred when my dad – who’s in California – went to the Costco near home to buy his own fancy new phone and add himself to the plan. The guy there, I imagine, stared at him blankly for a few dumbfounded seconds before spouting, “we can’t do that.”

I don’t know what was going on with the California guy, but my mom finally decided that the DC guy was more competent and he was the one who said it would all work out. So this morning, we packed our bags, loaded the van, took the shuttle into Pentagon City, and after a McDonald’s cinnamelts breakfast, we walked to Costco – yet again.

We had to be there maybe three/four hours. First, because the guy didn’t show up at the time he was supposedly scheduled to be there. And second, just because it took that long.

My little brother and I lounged around. Walked around. Played with abnormally large and rounded stuffed animals. 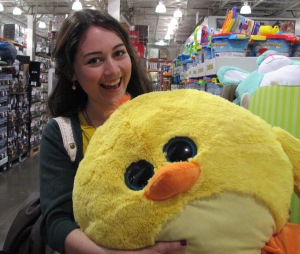 And basically tried to stay entertained and good until mommy sorted everything out.

I ended up playing on my phone and texting my friends about how I can actually send picture messages now!

It’s a big deal in my world.

Eventually we left the hotel and hit the road again.

QUICK HOTEL REVIEW: We stayed at the Sheraton Pentagon City in Arlington, Virginia – in three different rooms. The first room was on the fifth floor, smelled like peaches, and had a ridiculously dim TV that we couldn’t figure out. The second was on the tenth floor, they all flow together so I can’t remember much of that one. And the third was on the eleventh. We kept moving on up.

My mom got a great hotel deal of $103 for these rooms (a little more for the extra one we added). The hotel had a indoor pool and HUGE fitness center (both, we never did use, sadly). Bar/restaurant, gift shop, and a bunch of ballrooms/conference centers that seemed to never be empty.

Our biggest issue was that the Wifi wasn’t free, unless you were sitting in the lobby. We spent a great deal of our time in the lobby, but so did – who knows – how many people, so it was really difficult to get a good connection, and nearly impossible last night.

But hey, they were pet friendly! And we got a great view of DC at our third hotel room. 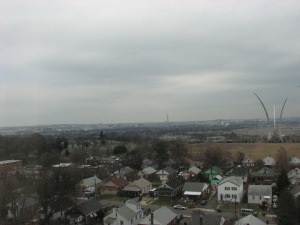 We are now in Woodstock, Virginia. To which, both, one of my friends, and my little brother responded with, “wait, isn’t that the place where that concert took place, with all the hippies. And the sex and drugs and alcohol. . ?”

Nah that was in New York.