Last night, we went to bed at three in the morning. We had dinner at Denny’s, I blogged, then around midnight we were the three lunatics who made our way down to the 24 hour hotel gym.

There was a rowing machine. My mom was in heaven.

Staying up late has never been a problem for me. It’s getting up. . We got up at 8am, which is 5am in Cali. And I know my body knows this, because it’s been hating me all day.

I tried to negotiate with my body by saying I’ll sleep in the car, but I lied. We went from our awesome hotel room at the Holiday Inn Express in Hanover, Maryland, to drive about thirty minutes down the highway to a hotel that will be close to the train station and all the sites we’re going to see tomorrow, like the Lincoln Memorial and maybe the Pentagon.

I couldn’t sleep because I needed to navigate the twisty highways.

Then we hit traffic. I felt guilty about sleeping, but I did knock off – until Lowla, our GPS, screamed about merging onto the next highway.

We were greeted by a sight when we arrived at our next hotel. There were all sorts of expensive looking people, military personnel, and cop motorcycles. The lobby was packed with chattering, well-dressed people. I wasn’t going to be rude and snap a picture. But there were about twenty other people walking around with cameras, so I figured they must not mind.

You would think that all this excitement would wake me up. Maybe even the brisk cold. The fact that I lost my mother in the crowd. Maybe the curiosity of trying to figure out what the gathering was by picking up snippets of conversation or people watching.

Or maybe just by going on my habitual search for the coffee machine.

Instead, I zombie-walked straight in front of an obvious group shot of about seven men in their dress blues and ribbons. Even apologizing for it didn’t wake me up.

We came into our hotel room, hit by the unmistakable smell of juicy peaches (second hotel room on this trip that has a smell). I crawled right into a bed, kicked off my shoes, and bid the world goodnight.

I was called twenty minutes later by my mother, who was at the van and told me to get one of the carts from the lobby so we could start carrying our luggage in.

That helped wake me up.

Our hotel is a little funky, as you have to pay for wifi, however they have a shuttle driving to the mall or train station every thirty minutes and that is free.

Well we make use of any features presented to us.

We went straight to the mall, for lunch and shopping! I’m typically a thrift shopper. But the further east coast we’ve gotten the less I’ve seen of them. Quite depressing..

The Pentagon Fashion Centre is huge. I love that it’s called a “fashion centre.” Sounds so sophisticated. They have everything from a Forever 21, to Hugo Boss, to Ann Taylor (I want one of her dresses), to Coach for men.

There was even a store named “The Art Of Shaving.” I wanted to burst in there and ask, “oh my gosh, is it really an art?! ’cause I think I may be splitting some hairs. . ” (Hah. Get it?) And my favorite name for a maternity store. 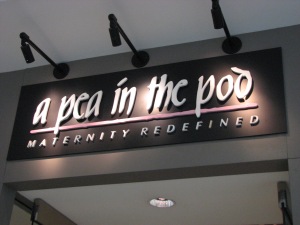 The mall also has the best environment. It’s clean and open and inviting. It’s also bursting with life. I’ve never seen so many people for so long.

We were there a few hours. To the point where we had a snack of dipping dots (my mom’s favorite) and dinner there as well.

It was fun, though. Not at all how I thought today was going to go, in a good way.

I was also so close to buying a five hundred dollar phone from the Sony store without a second thought. There was a sign that read %70 off electronics. It didn’t even matter. If I could get one with a nice camera for around a  hundred and twenty dollars, I was going to get it.

Turns out, they were sold out.

The guy said they sold their last one maybe an hour ago.

Must’ve been a good sale.