We started our day today by having lunch at a White Castle nearby our hotel. We had never been, and my family had seen the Undercover Boss episode for the company.

It wasn’t as good as you’d expect, I’m afraid.

After that, we walked down to the train station and bought four tickets for Penn Station, on our way to Hoboken! We’ve seen every episode of Cake Boss on Netflix, so of course, we had to go to Carlo’s Bakery while we were here.

. . Which always includes waiting in a long line. Everyone knows this. (So don’t be like me. Wear warm clothes.)

We waited across the street, in a line outside CVS Pharmacy like a sign ordered us to do. And then there were a lot of questions. Like, will someone come and get us? How do we get these so called “tickets” the sign talked about? Are we the victims of some rude prank, why are we outside a pharmacy? Etc etc.

We waited in faith like the rest of them and soon a guy came out and gave us tickets with numbers on them, like the kind you get at a meat market.

After about thirty minutes, we were finally in the line directly outside the bakery and didn’t feel as silly.

We went in there with the intention of getting cannolis. And connolis we got, as we made away with four cannolis, four lobster tails, a cupcake, two peanut butter cookies, and a pound of shortbread cookies.

Hey, it gets to the point where you go “I’ve just waited thirty minutes in the cold, I’m going to make it worth it!”

And we sure did.

The girl who waited on us was named Samantha, and she was so smiley and sweet and fresh, I had to take her picture. I asked if I could use it on the Internet and she brightened up even more so.

We had pizza (and seconds) right next store to the bakery then made our way back to New York, thinking we were going straight back to the hotel, but my older brother had other plans. He showed us Times Square in the evening.

And it was awesome.

There were people and cars, and marvel characters and Elmo, and side shows, and it was around nine o’clock at night! The city that never sleeps is right!

I’m such a night person that I was having a great time!

The truth, though, is that no matter how great I describe it, it won’t compare to the actual experience of freezing and walking and bumping into people and seeing all the beautiful sights.

We window shopped at a huge Macy’s, went to the Hershey store and got complimentary chocolate kisses (yeah!), and my brother gave us a mini tour of the massive underground Penn Station, that was like a mini city on it’s own!

I also fell prey to some impulse buys — not after spending a significant amount of time deciding however (I’m one of those people), which gave my family enough time to snap pictures of me while I wasn’t looking.

I ended up buying a little beautiful pocket watch necklace, a big fashion ring, and vintage earrings. Happy birthday to me!

We made it home without much trouble besides walking four blocks in the wrong direction before we realized we were going the wrong direction. But soon we were safe and sound in the warm hotel room, got coffee and hot chocolate down stairs, and settled in, ready to devour our boxes of goodies. 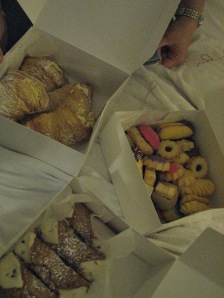