Skip to content
I have a friend name Jake.

Like this super-classy feather vest we found at Forever 21. .

He does like fashion, though. And so do I. So it was funny that we haven’t ever gone shopping together.

Julie wanted to go down to the Ontario Mills Mall to try on ball gowns and have this huge silly photo shoot, and Jake was going to treat us like his Barbie dolls. He had to go down the hill on Tuesday for an eye doctor appointment anyway (which was when I got a call about THE JOB), so it seemed like the perfect plan.

Until Julie found she needed to work Tuesday. =-/

So we switched it to a shopping day instead (and will be sure to come back when Julie’s free). It was actually the first time Jake and I have done anything together. 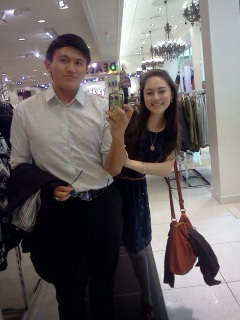 I texted him and asked if he wanted to dress up all chic (since we’re both supposed to be the fashion people, anyway), and after finally establishing and agreeing on what “chic” meant, he said sure. Haha. 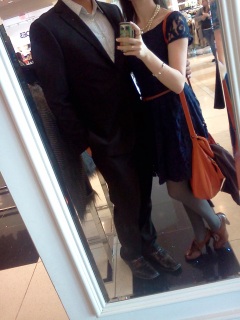 He wore a black suit (I believe a skinny fit? Not sure if that’s a saying in menswear. Still learning.) with a gray and white Aztec design under shirt. And I wore my favorite navy lace dress with pearls, a thin belt, gray nylons, and my wingtip heels. I love my orange purse too, and it was fall, so I figured it could pass.

Confession on my part. Just like the stereotypical girl-shopper, I love shoes.

Even in the men’s department.

Jake and I have agreed, though, that our styles are very different. I’m more vintage/boho chic, so he wasn’t feeling the sweet wingtip shoes I found for him. Instead, he pulled a pair of rectangle dress shoes that had a thin belt embellishment across the top.

I think that’s when we realized, out of pure coincidence, we picked shoes that matched the exact ones we were wearing.

After a burst of laughter too loud to be sane coming from the shoe department, we left the store, then stopped each other, stared, and pointed like a couple of jealous children at this kid on a tiger! It was like an ATV/electric wheelchair/awesomeness thing. After about the third kid who passed us on one of those, we HAD to know where they got them and if we could get one too.

Finally, we found where to rent them. There was a significantly long line of people and kids waiting to get one, and the girl there was explaining to the mother that the tail worked as an emergency break. Pull the tail, and the creature will automatically stop going.

That explained why I saw a lot of parents, walking around behind their kids, the creature’s tail in their hand.

I was also inspired by this man’s enthusiasm to be apart of such a wonderful animal rental company. 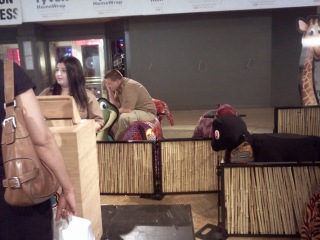 Doesn’t he look like he’s just ITCHING to rent one?

Honestly, I think Jake was definitely weighing the options of renting one of these babies. But I told him why don’t we just take a picture with it. That seemed to pacify him.

He took my phone and stepped back and I think he was totally expecting me to mount the thing and strike a pose. But the girl was already giving us a dirty look for hanging around too close. So I quickly got down and took a picture, before we were asked to back away.

Jake spent the rest of the day trying to make me fat. After Starbucks, mind you, he found out I’d never had a Cinnabon and dragged me over to get one. The girl offered a sample of their sweet raspberry lemonade (and we don’t turn down free samples. Jake was making cheap jokes at me all day), which I immediately poured all down my front, to the tune of Jake’s oh-so-subtle. .

“OH! Haha! You just poured that ALL OVER your dress!”

I mumbled how at least I’d smell good, to save my ego, then we went and sat down for Jake to cut up the cinnamon roll to share. He got to the center chunk and hesitated.

“You know, I usually just eat this in one bite. It’s the best part. .” He was saying. I could see the wheels in his head turning, then he forked it and shoved it at my face. “Here.”

“No it’s not. Just eat it!” He was pushing and pushing it at my face and I was backing away repetitively, telling him no, when PLOP. .

Big glop of icing. Right in my lap.

He quickly put the fork down and scrambled around, looking for napkins in our Cinnabon bag. “They didn’t give us napkins!!” He jumped to his feet and scanned the food court. “There aren’t any napkins in this FOOD COURT?!” I think he thought I was going to bite off his head. But I was busting up.

He tore off a piece of our paper bag and I used that to wipe the icing off, and me and my dress were fine.

This is probably why I wear dark colors, though.

We walked around the mall. And I bought nail polish, of course. But it was on a ridiculously high shelf, and I was in heels. So I don’t know what that was about.

I got four colors from Aeropostal of all places (I had a gift card), and we ended our day having an Auntie Em’s pretzel, a cinnamon one. It wasn’t until we were driving home that I realized we went overboard on cinnamon. I was sweetened OUT. But everything was good.

2 thoughts on “My Friend Jake”