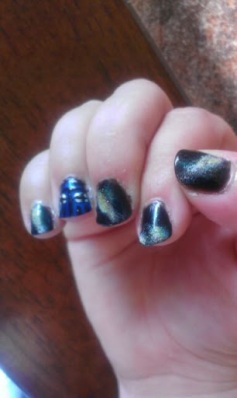 Julie – the oh so famous one, so you should know who I’m talking about by now – and I have made a deal.

The deal is – well, it’s more like a trade: Nails for fame.

Julie’s nails grow so fast, and she doesn’t mind having them painted (while with my instruments, I can’t have long nails, and I might end up in the food service industry, where I can’t paint mine), that it seemed the perfect idea to use hers. She’s a sport, so she agreed.

And I was willing to offer her fame. Who can turn that down?

I thought a while about what I should do for Julie. She likes purple. And she is a hard-core Dr. Who fan. Well, I was on YouTube (the site that sucks your life away) and found a video for galaxy nails, and the search was over. I knew what I had to do.

Start with a base coat and do all your nails.

I personally need a work surface. I’m messy like that. So I used a shoe box. (I’m not advertising American Eagle or anything.) I used the lid as the work surface. We were sitting on the floor with an ottoman between us, so it was to protect the ottoman. And I used the bottom of the box for a paint pallet.

Next, paint your nails black, leaving the ring fingers blank for the accent nail. 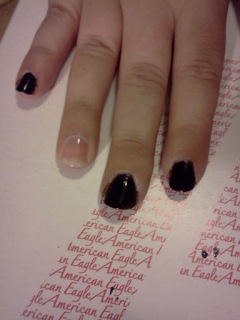 While the black is drying, paint the ring fingers a Tartus blue. (Dr. Who fans, forgive me if I spell it wrong.)

I started with the galaxies. Take a make-up sponge.

I’m very proud of myself, I actually bought some! Dollar store.

Cut a chunk of sponge, just big enough to be grip-able. But small enough so you don’t waste a whole thing. You could even use a tiny chunk and hold it with a pair of tweezers if you want.

Dribble some white on your work surface and dab the sponge into it, use as little polish as possible, then dab it across the nail at different angles to look like different galaxies. 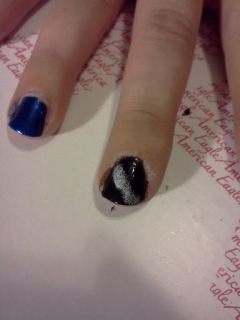 Do the same with a yellow color, focusing that more on the center of the galaxies. This is where I messed up and forgot two steps of the tutorial I had just seen. The first is I forgot to add the third, kind of peach color to the galaxies. 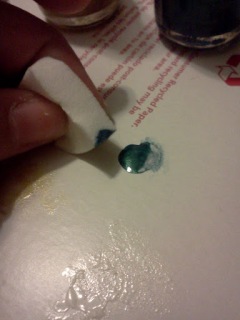 Next, use a dark blue and thinly border that around the white of the galaxy to blend it in with the black. The second thing I forgot was to toothpick on tiny stars in white, then a few bigger ones.

Finish with thin glitter polish to create more stars. I tried purple glitter polish and it drowned a galaxy, so be careful that it isn’t so thick or chunky.

For the accent nail, I figured a Tartus would be the best option. It’s simple enough for me to do, yet tricky and new enough for good practice.

I started by outlining the top, leaving a little bump for the tip of the Tartus roof. (Overall apology for picture quality.)

I don’t have any special tools, except a tooth pick and the make-up sponges. All of this was done by scraping up polish with the toothpick and guiding it along the nail.

Then, guide a black line horizontally across the nail, then vertically down the middle in a T shape. 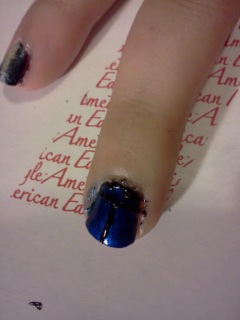 Then you finish by adding white squares on either side of the center line for the windows, and the black lines for the doors.

Finish with the window panes and you’re done! 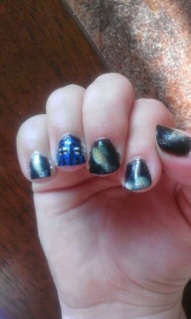 2 thoughts on “Dr. Who Galaxy Nails”