I went camping a few weeks back. Tenting, to be specific. And something about tenting is that you need to come up with exciting ways to entertain yourself besides going crazy.Lol, I’m kidding. I actually really like camping, believe it or not. I could’ve done without the humidity though, I looked like a cave woman. Anyway.

I’ve been so mesmerized by nail art lately. I couldn’t wait to have the time to actually try some of my own. Though I’m very limited with supplies. I’ve gotten a manicuring kit for my birthday way back. But with the colors. . I have. . Red, pink (moment of weakness, I think), copper, and silver. Oh and white.

So when I saw . . somewhere. About British flag nails, I was excited because not only did I already have two of the colors, that seemed to be the perfect thing to do at the time. So when we rode our bikes to the mall one day (which I got a lovely tan from, by the way) I headed to target for NYC blue. Just because it’s under a buck. 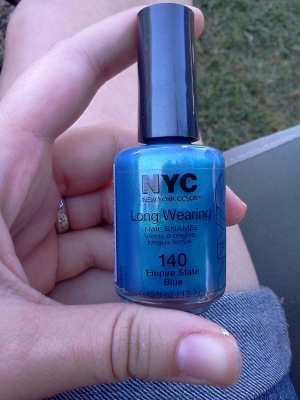 I forgot to post about this. I got a new base coat. It’s actually a two-in-one base and top coat from Sally’s but so far I really like it.

I started with the base coat. It dries pretty fast which is nice. So I moved on to the blue.

For the white, the way NOT to do it, I believe, is by painting each strip individually. I did this and it just ended up making bulging thick pieces where the paint overlapped in the middle. So my advice is do all the white at the same time and see how that works. I don’t have a “striper” brush – which sounds like an amazing tool, I’m not going to lie – so I had to just use the regular brush and a lot of focus to keep the thickness of the lines right.

The white took a very long time to dry. Because of the double layering, I think. So I was sitting there in a fold up chair, with white stars on my toes for a few hours. But I had a book and a guitar with me so it was pleasant.

Soon it was dinner time and my patience was running thin. So what I did was paint on another layer of the top coat, in a strange hope that it would dry faster. I think it did. But it could’ve been my imagination. Then I moved on to red.

The red from NYC had to be the easiest color to apply. It’s so clean and thin, not goopy. I got the lines thin by dipping the brush in the bottle, then scraping the side of the brush along the rim as I took it out. It left the brush a little flatter, and I used the thinnest side of it to make the lines.

That simplest color really created the whole look. Remember, with the red, don’t connect the diagonal lines to the center cross. They’re separate.

I finished by adding my top coat and I was done. =-) I’m very proud of this as my first nail art. Try it. If I can do it, you can too.

I only did the big toes, since it’s a busy design and also because just doing the big toes was enough to keep me busy. Of course you can always mix it up.

P.S.
It’s been about a month, maybe. And I barely have a noticeable chip in my nails. Even a guy friend of mine commented on how long they’ve lasted.