Skip to content
In my last post, I gave a link on expensive make-up versus the cheaper version. Well now I’ve come back with my spoils. From the glorious. . . Walmart.
Okay. So there’s obviously a reason Walmart’s apparently on the bottom of the list. I had planned on going to a somewhat new Walmart that just opened in my area and has yet to be crummy, but fate would have it I’d end up finding “le source de crum”. (Felt like being french today, don’t hate.)
I tried my best to remember my own advice from “Second Hand . . Makeup? — Don’t Freak,” but kind of very much failed. I remembered Covergirl silk-something-or-other foundation and something that sounded like NYC but one letter was off. But I didn’t do so bad considering. . 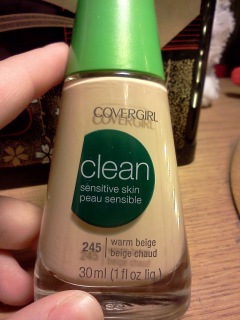 This was a little less than ten dollars. . . Wait, let me see if I can find the receipt. . Oh good, I didn’t have to dig too far into my trashcan. So if I’m deciphering this thing right, this foundation was $5.94. I picked the sensitive skin one, just to be safe. And I actually had to ask my mom for help when it came to color. I’m pretty white, but it’s a good thing I didn’t get what I was going to get – which was like ivory or something – because this beige worked well, and the ivory would’ve probably made me look like a mime wannabe.

I like NYC because it’s generally cheap. Or used to be. It’s looking to be expensive as everything else lately, so be careful, NYC users. Anyway, I forgot to mention how this crummy Walmart had practically NOTHING in stalk. So it was a very long, stressful experience. Especially when I’m buying something I don’t really know how to buy. I got this “individual eyes” for the primer base. And also because I need things simplified right now. And did that by making a “blue eyes,” “green eyes,” etc color scheme compacts to minimize thinkage (they also labeled the different colors, for crease, lid, etc, which is awesome), so, after taking a moment to stare at the “green eyes,” kind of wishing mine were that color, I grabbed a “brown eyes” and was good to go. It was $4.47 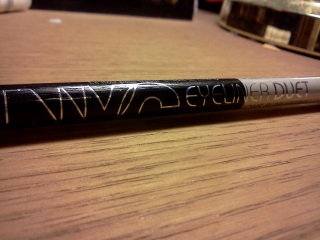 This was a pretty awesome find for me because, because of the way my face is, eyeliner is all I really need to look like I wear makeup, and to bring out my eyes. I just so happened to want a black, and a white, eyeliner (supposedly, white on the inner corners of your eyes makes them look bigger), so with the “NYC Eyeliner Duet” I got that. And for $1.72, which is pretty great. 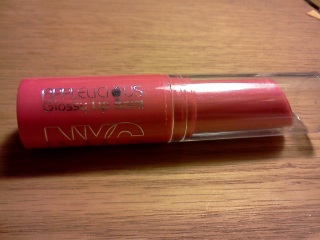 I wanted lip liner, if I’m being honest. But any form of lip color I was willing to bend for. This “Applelicious Glossy Lip Balm” was $2.74, and it has an aloe center with tint around the edges in a little apple shape, so. I bought it. Even though I really didn’t need it. X-) The color I got – or ever get with lip stuff – was too dark, so I’m a very good dabber. I usually start with chapstick, just ’cause i can’t live without it and I usually have applied it before hand anyway, so this keeps my lips from shriveling up under certain products, but it doesn’t let the color stay as well, so it’s a toss up. (It’s also a reason I bought the Applelicious.) Then I’ll top whatever coloring I’ve dabbed lightly on, with some gloss. Soon I’ll get this down to a science so the color actually stays for a while.

Anyhow. So there you have it.

The foundation seems pretty good, I think. If I put too much, I think that’s why it’ll get chalky, this is the first foundation I’ve ever used. I’m still learning even how to apply it.

The eyeshadow has never left crease lines, which is great.

I love the eyeliner, it’s smooth and a good color.

Like I said about the Applelicious, I got too dark of a color to really test it out on it’s own. But I’ve liked it anyway.

So there you have it. My own version of cheaper make up. Hopefully this helps someone who’s as lost out there as me. X-)