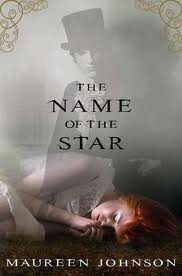 It has been a while since I’ve given a review on a book. I’ve honestly been so out of it, I can’t even come up with a logical – let alone, made up – excuse. And that’s saying something.

Anyhow. Yesterday evening, I finished Maureen Johnson’s “The Name Of The Star.”

“A gorgeously written, chilling, atmospheric thriller. The streets of London have never been so sinister or so romantic.” Said Cassandra Clare, #1 New York Times bestselling author.

After reading it, eh, she was pretty right. X-)

I’ve probably said this before about Maureen Johnson, but I love her work for the description. She is very good of throwing in details here or there, without making it sound forced. It’s so natural, I love it.

The story is about Rory, a Louisiana-southern girl, who goes to London for boarding school right when a series of murders start to break out across the city. Murders resembling Jack the Ripper’s work back in 1888. But still, ignoring this “Rippermania” that’s erupting all over the news, she dives deep into the boarding school spirit, with uniforms, homework, and crushes. Then, the night of the Double event (when two horrible killings happened on the same night), she saw him. The murderer. Creepy. Wildly alert eyes and a smoothed bald head. But for some reason, her roommate, who was right there, didn’t see him. This starts a series of questions for Rory, from the police, an organization who deals with ghosts, students, even herself. She wonders if she’s crazy. She wonders if she’s in danger. She wonders if she can just forget it all and focus on being a normal boarding school student. Then things change.

The story is a pleasant spiral of events that speeds faster and faster out of control closer to the end. And the end had to be my favorite part, honestly. Usually, I can sniff out how a story’s going to end. I was thinking “Oh that girl’s going to kill him,” then no. Then, as I was trying to reevaluate my prediction, the climax ended. I had a kind of shocked “oh!” moment. And then I was very, very pleasantly surprised with how the story closed. I’d like to describe it as kind of “bitter-sweet” but it isn’t very bitter, so then I don’t know how to describe it. But I liked it a lot. Best ending ever! I liked to be shocked that much.

Okay, here’s a quick overview on the book, that you may want to know about.

– VIOLENCE/GORE: It is Jack the Ripper. There is blood, disembowelment, gore, and violence. Several people get cut up, one girl is thrown in front of a speeding car, one’s head is bashed a couple times with a lamp, and one get’s slashed across the stomach.

– LOVE/SEX: The main character develops a love connection with a boy at the school, and they have a couple make-out sessions. The story is about murder, so it isn’t very detailed, except to talk about it afterwards or to describe them starting to kiss.

Hm. I don’t know what else you would want to know about the book. Those tend to be MY main issues with books, and things I want to know before I read them. Tell me in the comments if I’ve missed anything. The story’s fresh in my mind, so I can answer any questions. . Oh, I just thought of a few others.

– DRUGS/ALCOHOL: Apparently in England, you’re allowed to drink at eighteen. And even younger if supervised by an adult, apparently. So there are a few instances of teenage drinking.

The only other thing I have to say about this book is I got a little lost as to the setting of one of the last scenes. I just had a lot of trouble trying to figure out where they were or what their surroundings looked like. Other than that, and not EXACTLY being at the edge of my seat the whole time, I did enjoy it. I even made the mistake of reading it at night one day and freaked myself out so much I could barely open the curtains like I do every night for the morning light to come in. It was so pathetic. I knew this too, so I forced myself to rip the blind up and my heart was racing. Then I stared out the window to the street for a good couple seconds like I was actually expecting a bald headed, wild eyed Ripper to be standing there in a suit, grinning madly at me.