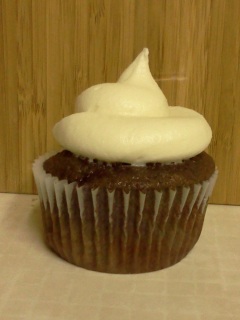 So, I made the Georgetown cupcakes the other day. . .

Haha gosh, yeah. That’s the best I can do for an opening line, short as it may be.

Okay, so. First of all, I followed the recipe. . For the most part.
The recipe starts with you sifting together the flour and salt. Which for me just means messy kitchen. Does it happen with anyone else that more flour ends up on them than in the bowl or am I just special?

It might have something to do with the fact that I’ve been using what I think is a strainer as opposed to a sifter actually. That could possibly be my main problem. I just dump everything in the sifter and shake, or toss it up and down like I’m some professional making an omelet (but then, I have so much fun doing that, it gets a little crazy and then there’s more of a mess). And it was my bowls’ fault for being too small.

Next, about creaming the butter and sugar, you’ve probably heard this before, but let the butter sit out for a while to soften. . I hate butter. But then I love butter. (Oh gosh, I hope you’ve read on after the “hate” sentence. I really don’t want nasty butter-haters-must-gorge picketers at my door.) It’s just that if the butter is too cold, it seems like it – not only won’t cream – but refuses to cream. It just cuts itself in chunks that roll around your bowl, laughing at you, until you smash them with a spoon like some sort of butter-murdering psychopath. . And can you tell I’m watching The Adams Family while I’m writing this? Yikes.

Whisking the vanilla, red food coloring, and cocoa powder makes another mess if you’re not paying attention, which seems to be one of my special skills in life. Then, I realized I didn’t have enough food coloring! Red Velvet cupcakes call for four TABLESPOONS of red food coloring. I always get the little box that comes with these mini dwarf-like drop-bottle things in four different colors. It’s kind of a staple, so I never thought in my grocery shopping that I’d need it. . Turns out, one of those little bottles is like the equivalent of half a tablespoon. And the random mixture I was making in my bowl just looked so dry, I felt like I needed to add something else. Red and yellow/green/or blue? Red and blue sounded so perfect. I thought it was pretty funny. Purple Velvet cupcakes, ha-ha. So that’s what I did. 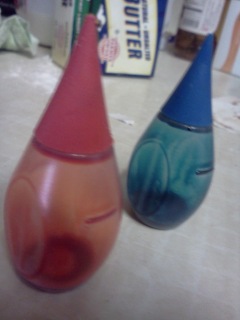 I got a little tinge of excitement while mixing it. I really thought I was so clever, even the batter looked purple. Then, I used my mini ice-cream scoop (don’t ask me how I got a mini one, I don’t know) and filled a twelve cupcake tin, with more than enough left over. It was strange. The recipe said it made twelve cupcakes, but I made an exact twenty-four. Oh well, I stuck them both in the oven. One on the top rack, one on the bottom to experiment with the heat distribution.

I was washing dishes when the timer rang, so that could’ve been a reason why they failed. Maybe they just cooked too long. Although, I did check them the first time and they weren’t cooked all the way. At least the top one wasn’t, I forgot to check the bottom one, but figured that one would cook even slower than the top. I might’ve left them in two or three minutes after the timer rang, just to finish a dish and dry my hands.

While they were cooling , I started on the cream cheese frosting. This, I was really excited about. Because at Georgetown cupcake they PILE the frosting on. And in my opinion, unless it’s Devil’s food cake, too much frosting is too much. Especially on a cupcake, it gets all up in your nose and stuff. But their customers frequently buy and eat their cupcakes, frosting and all. So there had to be something special about it. 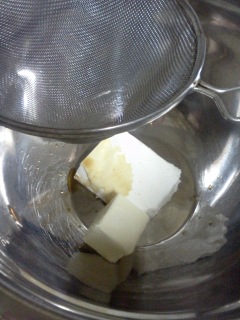 I thought ahead about leaving the butter out this time, so that didn’t give me trouble. No. It was the four cups of the confectioners sugar that did it.

Are you stinkin’ kidding me. I couldn’t believe I didn’t have enough powder sugar too. But I got optimistic, finding two open packages of in the pantry (another random staple in my house). Luckily, out of the first box came just about a cup. The second one was a bag. I got about a cup out of that too and was feeling pretty good about myself until remembering I was still two cups short. . .

Confectioners sugar is, in other words, powdered sugar, and as the name suggests, it’s powdery light and will incorporate nicely into a frosting, adding sweetness without any crunchy sugar crystals getting in the way. Granulated sugar that you put in your coffee has sugar granules. And then there’s super-fine/castor sugar, which is in between the two in fine-ness and is used for meringues and such. Hence, I split hairs and went for superfine, adding only one cup of that, thinking since the crystals are obviously bigger than powder, they must be sweeter as well?

I don’t know if that’s true or not, but I can tell you, my frosting certainly had some crunch to it.

When my cupcakes came out, I focused on them for a good thirty seconds, trying to find any hint of purple in them. They were looking pretty brown. I was disappointed. But on one, I did see a hint of purple swirl along the top. Elated, I picked a cupcake and tasted it. Red velvet has always seemed like this kind of sweet, noncommittally chocolate taste to me, so I think I nailed that area. Otherwise, it was pretty dense.

If you’ve seen Charlie’s Angels with Cameron Diaz, I’d say that my cupcake wasn’t exactly a Chinese fighting muffin, but it was definitely thinking about it. It just wasn’t moist or fluffy. It kind of swallowed like a dry lump sliding down your throat until it thumped at the bottom. This is when I started thinking that I maybe left them in too long.

My final hope was that the frosting would perk them up a bit. And I guess for the most part it did, but then I started running out of it toward the end. But yeah. . I made these Wednesday and there’s still about ten sitting there, like their non-purple depressed selves. Guess what’s for breakfast? 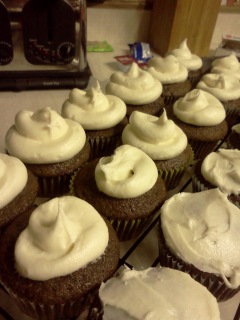 I obviously did something horribly wrong. Or, it’s an advertising trick “you obviously can’t make these delicious cupcakes at home, so buy them here!” But I’m probably just skeptical.

I’ll try again, after buying coloring and powder sugar. . . Another thing I used was a hand mixer, since I don’t have one that stands alone. The recipe said I could, but I can’t help but wonder if that happens to make any difference.

Anyway. Even though they weren’t gaggingly awful, they were still dry, dense cupcakes with crunchy icing. . Fail.

We had some recent work done on my house. And the guy was so nice and took his time. So, when my mom entered the house after checking the work and seeing him off, she smiled at me.

“Oh Rebekah, I gave him a cupcake.”

I just kind of stared at her with a smile frozen on my face, forgetting to breath out. “One of my cupcakes?”

“Those cupcakes are disgusting!” I blurted, almost panicking.

Okay. Don’t get me wrong. The guy was super nice and deserved a cupcake and it was sweet of my mom to do it. And she was insisting they weren’t that bad. (She did eat a couple too. Not in the same sitting.) And I know they weren’t THAT bad. I just felt like he definitely deserved a better cupcake, and I was also too busy voicing my opinion to hear her say anything otherwise.

“He’s going to think that we hate him! And that he did a horrible job and that’s why we’re giving him a nasty cupcake!” I started hoping that all the hard work he did would make him ravenous and that he wouldn’t even realize the cupcake was dry and crunchy, because he’d eat it so fast.

I’m kind of embarrassing now that I think about it.