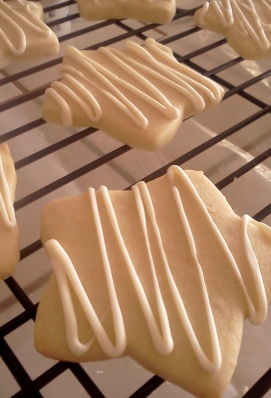 The way my family celebrates birthdays is we have a family celebration on the date and a friend celebration sometime near that. This year was a party full of insanity, laughter, and (of course) good food. Yes, this year was girls-only.
A couple days before, I somehow, by a miraculous occurrence, convinced my mom to buy me peppermint extract. Don’t ask me how I did it. Tears might have been shed at one point or another, but anyway, it worked, mission accomplished. So, with the reward of my hard day’s labor in hand, I flipped through the new cookbook for something minty. Found it: choco-mint star cookies. Perfect! Well . . . almost.

I missed a whole ingredient when I scanned the page the first time. Stupid shredded coconut. We never have coconut. I don’t even know what section of the store to find it in. But I had gone through all this trouble, just to give up at a slight set-back? No way. I planned on making choco-mint stars, and by golly, I was going to make choco-mint stars. Maybe if I just happened to misplace that one teeny ingredient, no one would know.

I followed the recipe (minus the coconut).

Luckily, I already knew what texture dough should be. (Is that lucky?) So evidently, the creamy wad inside my bowl wasn’t right. Okay, cooking 101. It was just the basics, right? All I needed was to make my dough thicker, and flour’s a thickening agent. I sprinkled some flour. Mixed. The pale gunk was still sticking to the sides of the bowl so I added a little more flour, maybe a little more. When it wasn’t sticking, I stopped, seperated the dough into two lumps, wrapped them in plastic wrap, and placed them in the fridge. Fingers crossed.
About an hour or so later, I spread parchment paper on the counter, and retrieved the dough balls. I poked them. Seemed alright. In fact, the dough was perfection itself. I was able to roll it out, cut my stars, and everything. All the while being greeted with this minty smell. Mmmm. Fresh.

They baked perfectly. Actually, they were the same texture as the Chocolate buttons I made before. Moist and (hmm) not crumbly but not chewy. What would you call that? A soft crisp? I don’t know. Anyway, they were good. But I wasn’t finished there. I still had to drizzle the chocolate.

For, I think, my thirteenth or fourteenth birthday, my parents bought me a chocolate melter. It’s basically a mini pot that you plug into the wall, and (duh) it melts chocolate. I like it mostly because – daydreamer that I am – I can forget about the chocolate without worrying about it burning, catching flame, boiling over, blowing up, or whatever disasters my imagination can come up with.
In the picture, the white chocolate is on the bottom and the milk chocolate is drizzled over the top. So that’s what I planned on doing. The only thing is, it probably took me twice as long as the person who made the cookies in the picture, since I had to melt, first the white chocolate, drizzle it, wash the pot, then melt the milk chocolate.
Surprisingly enough, it never crossed my mind as to why the heck I was going through all this trouble for my friends. They would’ve been perfectly fine if I simply dipped the cookies half in chocolate, half in white chocolate, which might’ve been easier. But they looked great (the cookies). Tasted great also. I don’t think I’ve ever had a mint cookie, not to mention, ever baked a mint cookie before. And these were still delish. Kudos to me (not to toot my own horn, of course) for beauty on my first minty freshness try.