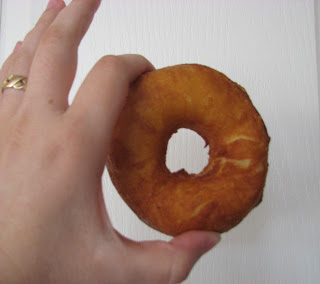 Breakfast time . . . again. About a week ago, I rented “A Slob In The Kitchen” from the library. I remember a simple recipe for making doughnuts in it: use a bottle of some sort to poke holes in refrigerated biscuits, fry, and voila! Piece of cake. Well, guess what I found in the fridge. Yep. Refrigerated biscuits. God-sent, obviously.

I tried using a teryaki sauce bottle for the holes, but that looked too small so I switched to using the teryaki sauce bottle CAP. That’s using the old noodle. Get it? Teryaki sauce; noodle? Anyway, while I was poking the holes, I had the oil frying. Be careful when you fry oil, okay? Most accidents occur in the kitchen and you do not want it to happen with oil. If a little bitty splatter hurts, just imagine how much it stings if you really mess up.
I have this circular, flat, sieve-of-a-thing with a long handle poking out of the side. It’s an oil-splatter shield. Works really well too. You shield yourself when you slide (slide, don’t plop) things in the oil and cover the pan so if the oil splutters it won’t get you. Ah, the wonders of science. Makes you envious that you didn’t come up with it on your own, huh? I know how ya feel. Well. Back to the doughnuts.
Things were going well. I even started doing two donuts at a time. After a while, when the oil was hot enough, I only had to leave the donuts in for a few seconds before they turned golden brown. I was doing it like a pro. And this was my very first time. Oh, yeah.
I finished frying within minutes and turned off the stove. From what I remember, the book said something about one part water (or liquid) and one part powder sugar for the frosting. I tried that. Eh, too watery, I added more sugar.
While I was spreading out the waxed paper to set donuts on to frost, I popped a donut-hole in my mouth. In short: it was disgusting. The inside was thick, gooey, nastiness. It was golden brown on the outside, pale mush inside. Cracking open a couple of the donuts, I found that they were the same. Sighing, I turned the stove back on again. It looked like golden brown didn’t do the trick. A dark, almost crimson color worked better, so I went for that. After re-frying each donut and donut-hole, I went back to my frosting.
﻿

It was a little thicker with the extra sugar, until it slipped down the sides of my donuts without so much as thinking about sticking. I tried three different times with the darn frosting. First, it was too watery, then, it was so thick that it slid down the perfectly constructed path my last frosting attempt made, third time I don’t even remember, I had gotten sick and tired of making frosting by then that I dashed the whole thing. Whatever. If they needed more sweetness, I could sprinkle powder sugar on them.
Little brother (that’s his new name) was the first victim. When I announced that the donuts were done, he sped to the kitchen and quickly asked how many he could have. I had him divide the eight donuts among the three of us.
“Two and one-thirds.” He mumbled to himself, surveying the tray to find the best ones. He grabbed a donut-hole and took a bite. “That’s my one-thirds . .” He said, still trying to pick his two donuts. Suddenly, he stopped chewing and raised his head from the tray. “Um, nuh-uh. I’m okay.” He was shaking his head as if he was leaving a business deal. “I don’t like them.”
My first costumer was quitting before he even begun! I snatched a donut-hole from the tray and took a quick bite. The darn, stupidest thing was still mushy inside. I ripped open a donut. That looked like it was baked through.
“Try the donuts. They’re better.” I assured him.

I took a big bite of the half a donut in my hand to prove it. It worked. He was back in a millisecond and grabbed a donut toward the right. I guess he was still a little dubious because he didn’t sit down until he had taken a bite to test.

While I was eating my two donuts, I found that half my second one wasn’t cooked all the way. Which is really messed. They were all the same color and everything. I mean, come on. I don’t know if I forgot something from the cookbook (I was baking this stuff from memory, after all) or what. So it was kind of a success/fail, depending on what donut you got. Older brother apparently was oblivious to the problem until this evening when he tried eating a left over donut and found it was still mushy inside. Surprised, he showed it to me, and I got a chance to work on my shocked face. “Hm, that’s strange . . “